Targi Kielce has been awarded with numerous awards and distinctions, the most prestigious being: the Polish Business Leader which has been awarded eight times, as well as a Diamond for the Gold Statuette of the Polish Business Leader. These accolades are bestowed by the Business Centre Club. The Company received the Gold Statuette in recognition of effective implementation of its stable development policy, continuous introduction of new high quality services, as well as its generosity in providing support to those in need. 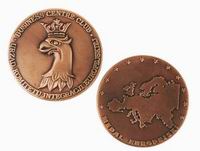 In recognition of the organization of prestigious international trade fairs and exhibitions, the promotion of Poland at international level, as well as the contribution to the celebrations of the Polish Year in Ukraine, the Kielce exhibition centre was honoured with an award of the Minister of Foreign Affairs. In 2004, the Company received an Economic Award of the Świętokrzyski Voivode, which is given to companies contributing to the promotion and economic and social development of the Świętokrzyskie region, enhancing its image and advertising its values. In 2007, the Targi Kielce company reached the top of the FORBES ranking ”The Event of 2007 in the Świętokrzyskie Voivodship”, in addition to being honoured with such awards as: NOVATOR, ‘Market Leader’ and ‘Leader of the Region’. For a number of times the Kielce exhibition centre was honoured with a Business Gazelle, a prestigious European award given to small and medium-size enterprises. The Gazelle is presented by the Puls Biznesu magazine to companies which not only report profits, but also record increasing revenue levels on an annual basis. What the organizers found to be the most important factor was its rapid and continuous growth. The position in the ranking depends upon the percentage increase in sales. The purpose of this ranking is to promote companies which emphasize transparency in its activities. Therefore, to qualify, all companies in the ranking need to have a proven track record and to be reliable, with solidity and honest openness being their priorities. According to the organizers, an important purpose of this ranking is to promote companies which are honest, reliable and which reveal all information about their financial results. In 2008, the Targi Kielce company also received a Świętokrzyska Quality Award, which is given by the Marshal of the Świetokrzyskie Voivodship, while Andrzej Mochoń, President of the Management Board of Targi Kielce received the ‘Man of the Year’ award from the Świetokrzyski Voivode.

In addition to that, in 2009 the Company received another Business Gazelle award, Foreign Companies’ Partner – Ambassador of the Polish Economy award (from the Business Centre Club and the Ministry of Foreign Affairs), as well as The Well-Perceived Company award (from Newsweek magazine). Targi Kielce was also awarded by the State Labour Inspectorate in its competition Employer – Organizer of Safe Work.

In 2011 Targi Kielce was also showered with distinctions. The Centre was also awarded with the BCC's Ambassador of the Polish Economy title in addition to the ELAMED publishing house' competition accolade in the "State-of the-art Hall" category. 2012 brought further awards, the most important ones need to be mentioned: the Swietokrzyskie Laurel in the "Region's Enterprise" category and again the Ambassador of the Polish Economy in the Euro-Brand category or the Highest Quality Emblem QI 2012. The emblem was granted by the Gazeta Prawna Daily editors' of the Business Forum. The competition was held under the auspices of the Ministry of Regional Development, Polish Agency for Enterprise Development and the Polish ISO 9000 Forum.

In 2013, the Targi Kielce's list of accolades was extended to include another Ambassador of the Polish Economy title, Swietokrzyskie Economic Award - the Wings , the eight diamond to the Golden Statuette of Polish Business Leader and the title of the Good Employer awarded by Dziennik Gazeta Prawna Daily.